With the start of summer comes that favorite pastime for the entire family, swimming. Day after day of relentless hot weather can be relieved by a cool dip in the pool, lake, river or ocean. Keeping your family safe in the water is a must. Accidents happen and drowning can happen in an instant. 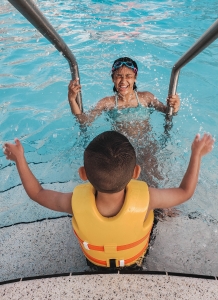 Splashing and yelling for help, like they do on TV or in the movies, is not necessarily how drowning really looks. To quote an excerpt from Soundings, Drowning doesn’t look like drowning. “Dr. Pia, in a piece he wrote for the Coast Guard’s On Scene magazine, described the instinctive drowning response like this:

This doesn’t mean that someone who is yelling for help and thrashing around, isn’t in real danger — they’re experiencing aquatic distress. Aquatic distress doesn’t last long, however in contrast to true drowning, these victims will still help in their own rescue. They can grab lifelines, reach for throw rings, etc.” 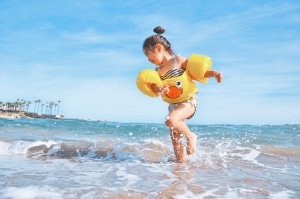 It’s helpful to look for these different signs of drowning:

Sometimes the swimmer may just look as if they are treading water while looking up at you. Ask them, “Are you alright?” If they answer, they probably are. If they come back with a blank stare, you may have less than 30 seconds to help them. If kids are splashing and laughing, and then all of a sudden get quiet, you need to find out why.

The USA Swimming Foundation reports nearly 90 children younger than 15 drowned in a pool or spa from January through May 2018, and every year about 19 children drown during the July 4th holiday.

Teens and young adults typically do not follow water safety

While drowning deaths peak among one and two-year old’s, drownings continue to be the second leading cause of preventable death through age 15. (source: National Safety Council)

Swimmers should keep these safety precautions in mind:

Also, if your child has been in the pool for a period of time, they may have swallowed a significant amount of water. Fluid in the lungs is a bad thing — it can lead to pneumonitis, a non-infectious inflammation of lung tissue, caused by the irritating effects of something bad in the lungs.

What should you look for regarding fluid in the lungs? If your child, or anyone else, gets out of the water and has any symptoms similar to when something “goes down the wrong way,” or if they have persistent heavy coughing that doesn’t stop after a few minutes, or vomiting, you should take them to the ER immediately. Usually, these patients are treated and observed for four to six hours before they are released.

If someone coughs for a couple of minutes after getting out of the water and asks for something to eat or drink, it usually means they’re fine. But if you are concerned, a trip to the ER as a precaution, is your best bet.

Surepoint Emergency Center  is a modern emergency medical facility open 24/7. As an alternative to the traditional hospital ER experience, we offer convenience and minimal wait time, along with highly trained emergency medical staff and state-of-the-art equipment.

Our top priority is bringing high quality emergency care, quickly and easily to your family. We are committed to making patients feel better faster in a comforting and compassionate environment.